I’m an outliner. I daydream up a story while I’m lying in bed, unable to sleep ’cause I can’t shut off my thoughts, and when I know that the thoughts in my head are definitely what I want to write, I write ’em down and make an outline. Then I get on to the actual story writing!

I thought it’d be a fun idea to go through my outline of The Starriest Summer and see what deviates from the actual book 😀 I only took screenshots of a few parts.

Most of the Lereli stuff at the beginning of the book is pretty faithful to my outline, as you can see above in Chapter Two’s outline.

But in the actual book, there is no lizard. Michelle wakes up, see Jayse isn’t there, and freaks out.

Also, in the outline, Michelle, Launce, and Nichols don’t join Gediyon to rescue Jayse from Sheirced. Gediyon thinks it’s too dangerous for them and says, “Stay here,” and they oblige. They stay on shore, all worried for his sake, while all the action is happening off screen, then Gediyon pops out of the water with Jayse in his arms and he’s like, “Woo hoo, look what I got!” Only he doesn’t say it like that, ’cause, like, that’s totally outta character.

In the final version, they argue back, “No way! It’s too dangerous, you’re not going alone!” And, on the way, Michelle gets injured, and that gives Jayse reason to heal her instead of her being stupid and falling out of a tree because she chased after a stupid lizard that stole his dumb necklace. 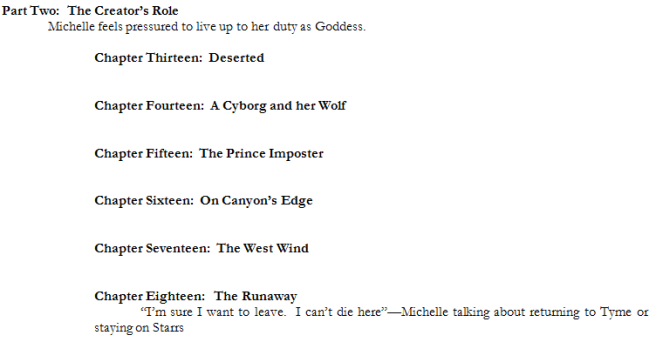 I guess I never outlined Part Two.  According to my notebook, I wrote all of Part Two in six days, which I’m pretty sure is the fastest I’d written any of the parts. I was probably so enthralled with the Prince Imposter and Michelle being on her own that I knew exactly what I wanted to write and didn’t wanna waste time outlining it.

And then there’s all of Part Three, and originally, there was no Kalei. Did it seem rushed? Did it seem shoed-in? It probably was. Worry not, Kalei’s true purpose will be revealed in Book Three 😉 (And the real explanation behind her fate was touched on at the end of Book Two, so…yeah…)

What are your thoughts on outlining vs winging it?

Adelle Yeung is a fantasy author. She is also a voice-over artist who can’t go a day without a cup of tea. When she’s not writing or recording, she enjoys sewing costumes, baking sweets, and escaping on video game adventures. She lives in California with a cat that dreams of eating the pet bird. View all posts by Adelle Yeung