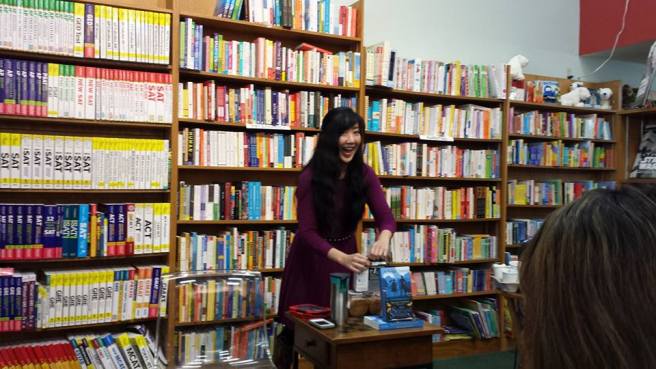 The event was a lot of fun!  Thanks so much to everyone who showed up 😀 It means a lot to me!

I brought tea and cookies to the event.  Many audience members refused the offer, but I forced it on them!  Ha!  Aha ha ha!  Ha!

I read Chapter Two from the beginning until Madam Manasa disappears from the boat.  I was a little nervous, so I read it faster than usual, taking up twelve minutes instead of the previously timed eighteen minutes.  I put on voices and accents, which some people told me afterward they quite enjoyed.  They said they could tell what people were speaking just from my voice change, so that’s awesome! 😀

The Q&A session was fun, too 🙂 We discussed my video game inspirations, how I wrote the characters, and then some more in-depth stuff about the YA genre and romance.  There were some great questions.

The bookstore sold out of my books from the event!  That’s cool, buuut then there was also another woman who wanted to buy a copy but they didn’t have any more >_< I need to bring more.

It was a lot of fun, and I can’t wait to do it again for book two 😉

In another news, I’ve added another page dedicated to the voice-acted book promotions!  I wanted to make them easier to find.

Click the picture and it’ll take you directly to the page 😀 Or here’s the URL for the page. https://adelleyeung.com/books/teasers/

Adelle Yeung is a fantasy author. She is also a voice-over artist who can’t go a day without a cup of tea. When she’s not writing or recording, she enjoys sewing costumes, baking sweets, and escaping on video game adventures. She lives in California with a cat that dreams of eating the pet bird. View all posts by Adelle Yeung

2 thoughts on “The Starriest Summer Reading at The Avid Reader”